The Scandal of Good Friday

The Scandal of Good Friday

There’s a dirty little secret to Christianity, and it’s not one that we publicize often. It’s not one that we think or talk about all that much, probably because it does make us a little uncomfortable to ponder it for too long. It’s a secret that’s even caused people to walk away from the faith when they discover it. The secret is this: Christianity does not make sense to our mortal reason. Oh, defenders of the faith have tried. Theologians, scholars, historians—all have tried to fit our faith into some kind of brain-sized box, to trim the loose ends and unanswered details, to rewrap and repackage it so that it seems to make more rational sense. They’ve had some level of success, I suppose. But it’s on Good Friday that we’re faced with the stark truth of it: this faith defies reason.

For on Good Friday, everything we believe comes together at the very heart of it. God, who is immortal and all-powerful, hangs dying on a cross. The Prince of Life dies. And what is it that is killing Him? Not some powerful weapon forged in mystical fires. Not some ancient god-killing blade or spear or stone. Not some ancient word or spell of power. What’s killing God is wood—simple plain beams of wood; nails—the kind you’d find in any everyday carpenter’s shed. What’s killing Him is not the bellow of demons or the rage of an equally powerful shadow god. It’s whispers of jealous men in the Sanhedrin; it’s lies and false accusations; it’s the sigh of resignation from Pontius Pilate as he washes his hands to give the crowd what they’ve voted for. What’s killing our God, what slayed Him, is the sins and misdeeds of others. It’s the sins and misdeeds we’ve committed ourselves.

We’ve all been on the receiving end of evil because of what others have done to us—gossip, lies, financial scams, emotional hurt, even physical harm. And others have been the recipients of harm from our wrongdoings, intentional or accidental. But who among us has suffered in this way we’ve heard about tonight? Who of us has had the punishment due for the sins of others thrown onto our backs, carrying it body and soul as it bleeds the life out from us? Who of us has carried—or is even capable of carrying—the sins of multiple other people, of a nation, of the world? None. It does not compute for us. We cannot be punished for the sins of others. We can’t offer ourselves in the place of others to suffer the consequences of what they’ve done, what they’ve earned. It’s impossible.

Yet this is what we see on Good Friday. Jesus suffers, dies, is killed as the punishment for the sins of others. This is one man dying for the many. This is one man dying for all. We struggle to process it. No judge in our land would allow anyone to bear someone else’s prison sentence, let alone their death penalty. In spite of our brave talk, only a handful of us would dare to die for a good person, but for a convicted sinner—no one would die in their place. No judge would allow it.

And yet, here it is, on Good Friday, in startling color. God has said that this is acceptable payment. He has said, “It is finished.” It is paid. It is complete. It’s true, in spite of our reason’s inability to grasp and control the situation.

It’s this sacrifice of the one for the many that leads us into an even deeper defiance of our reason. For it’s not as if this is just some case of mistaken identity. The sentence has not been given to the wrong man in some great injustice or error. All of this happens—Jesus suffers under Pontius Pilate, He’s crucified, died, and is buried—because Jesus wants it to happen this way. God has chosen for things to play out this way. Jesus said to Pilate, “You would have no authority over me at all unless it had been given to you from above.” Your decree would mean nothing, Pilate, unless God had directed all of history to put you in that very position at that very moment. Indeed, this has been His plan from the beginning. From the first sin, it has been God’s plan that He should share our mortal form, as the Offspring of the woman, making us His true image, and He would crush the head of the old evil foe, even as the evil one struck His heel, poison and all, striking to kill. From eternity, God the Son has taken this upon Himself. He has chosen to die, to bear the penalty of sin, receiving death as His wages. He has taken the death sentence off Adam, off His ancient church Israel, off David, off His disciples. He has taken the death sentence spoken to us six weeks ago on Ash Wednesday: “Dust you are, and to dust you shall return,” and He has put that on Himself. Truly, our intellect and reason must tremble at this.

And now to the most shocking part of it all, as far as our reason is concerned: He did all this, not only for His friends, not only for His allies, but for all. He does this even for His enemies. He dies even for those who are killing Him. He dies for Pilate and the Roman torturers, for the Pharisees and Sanhedrin as they mock Him. He dies for those who have sinned in any and every way, for those who sin still, knowing full well that it is sin and that there is a penalty. Jesus died for the tax collectors who knew what they were doing to their fellow Israelites. He died for the prostitutes who knew what they were doing to themselves and their clients. He died for drug dealers and murderers, like the one next to Him on the cross. He died for people of every camp and tribe, and for those who are in their opposite camps. He died for liberals and conservatives, for vaxxers and anti-vaxxers, for maskers and non-maskers, for Putin and for Biden, for people of color and for whites. He even dies for you, for your sins, which are no less and no greater than anyone else’s, for the secret sins in your heart that you would blush if others had a hint of, or for your sins splattered on the front page of newspapers and websites.

The scandal we stand before tonight at the foot of the cross is the scandal of grace. To think that the righteous could and would die for the unrighteous, that the holy should be sacrificed for the unholy—that is a scandal when we really stop to think about it. It defies reason. It defies everything we know in the world. That God’s Son would choose to do this for sinners—for us, for those we think are worse than us—that’s shocking grace. And that’s the bleeding and beating heart of Good Friday.

It doesn’t make sense, even though it’s the core of our faith. But then again, love has never made sense. Not really. Giving of ourselves, even when there’s little or no payout. Sacrificing our time and effort for the joy, safety, and peace of others. Yes, those who don’t believe in God or in love-made-flesh in Jesus will offer their supposedly rational reasons for love, citing some kind of biological or genetic explanation. But it never completely adds up. Ask a grandmother why she’s putting so much effort into giving her grandchild such a wonderful birthday or Christmas when the only thing she’ll get out of it is a tired smile and a thank-you, and she’ll say the reason she does it is “Love.” Ask a hopeful groom why he’s relocating from everyone and everywhere he’s ever known to be with his fiancée and he’ll say, “Love.” Ask a friend why they care so much about you when you’re not related by blood and they’ll say, “Love.” Ask Jesus why He’ll die in your place, gladly, willingly, why it’s been His plan for ages before you even existed and He’ll say, “Love.” Ask God why He’ll accept the payment of His only-begotten Son, why He’ll put His own heart on the altar of sacrifice and He’ll say, “Love.”

It’s the love of God that makes Christianity so surprising, so full of grace and infinite forgiveness, even if it doesn’t add up in the cold mathematics of our reason. We can never find the bottom of it. No matter how far we’ve sunk, His love has been there, waiting.

Good Friday defies our reason. We hear of the tragedy of the death of the Son of God, we see the blood on our hands, and our hearts are wrenched. But we also know joy, for this is how we are redeemed. This is no morbid funeral or a memorial of justice gone wrong. This is the center and foundation, the entire sum of our peace with God and with one another. It’s peace that passes all understanding, all rationality. It’s love that tells our love what to look like, what to do, how to go out to those around us. So we gather at the cross. We marvel at the reason-rattling depths of the love and grace of God. We rest in His forgiveness as it is completed, as it is finished, and we wait for yet another marvel to once again defy us and everything we thought we knew at the empty tomb. In the name of Jesus, who is Love. Amen.

Previous Story
The Sum of the Covenant
Next Story
Broken Patterns 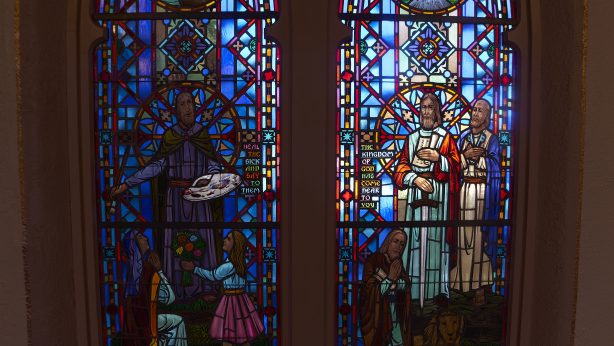 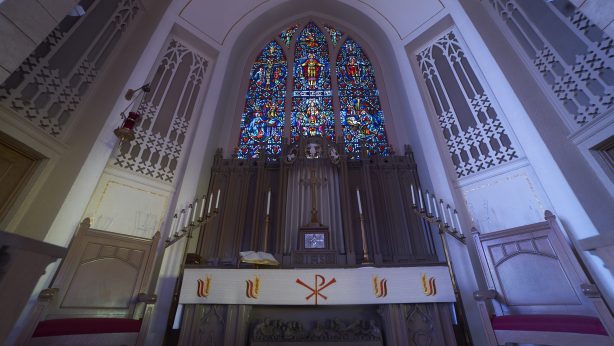