It wasn’t so long ago that we were in this sanctuary singing our traditional end-of-Christmas Eve hymn, “Joy to the World.” Joy to the world, the Lord is come; let earth receive her King. Let heaven and nature sing.

But now that we’re on the other side of the Christmas season, it doesn’t always feel like heaven and nature are singing in perfect unison, does it? Wars and rumors of wars, surprisingly high credit card bills, already slipping on New Year’s resolutions, worry about the economy, about politics, about family, and our jobs, our income, our retirement, our health—it’s all painfully discordant. This is when it gets harder to hear those harmonies between glory to God in the highest and peace here on earth, those harmonies we sang of so happily only a couple weeks ago.

Earth is not heaven. This isn’t news to any of us. The tones and sounds and notes of this world sound nothing like the songs of the Church triumphant at rest in the presence of God. The sniffles and coughs, the sighing and tears, the tragedies and heartbreaks don’t line up with the melodies of the angels. And why? Because the earth, in this captivity to sin and death, under the temptations and attacks of the evil one, earth—and that includes us—wants to sing its own song, our own song.

God has told His people what’s good for them. He’s told us what makes for beautiful music between heaven and earth. He’s told us His will in the commandments and wisdom and songs and psalms of Scripture. And yet we insist that maybe we know a better song. Maybe our song is more beautiful than the one from the Creator of the stars of night. Maybe we’ve found deeper truths than the One who laid the foundations of the earth. And even if we don’t think that way that directly, we at least live our lives as if we knew better than Him. All the earth has done this; all creation groans under this self-chosen path away from the paths of God. Adam and Eve learned it the hard way, and so do we. So has all creation. Heaven and nature are both singing, but it’s not the same song.

Yet our Lord and Creator comes to this world that’s so different than the perfect glory of heaven. He’s born into this creation in the natural way, born of a mother. He lives a life growing and maturing as we do. He eats and sleeps, He speaks and grows. And notice that everywhere our Lord goes, heaven and nature do begin to sing in unison again. It begins at His birth. The angels appear to shepherds, watching over their flocks by night. The two choirs meet: the heavenly chorus and the earthly ranks of man and animal. And the song rings out in the night: “Glory to God in the highest—” that is, heaven, “and peace to His people on earth”. Heaven and nature both spoken of in that song. And that song, first sung by the choirs of heaven, is now sung by us here on earth in the liturgy, nearly every week, in the service: “Glory to God in the highest, and peace to His people on earth.” Let heaven and nature sing.

The song didn’t stop there. The magi from the east, men of the earth, saw the star of the heavens and knew that this would guide them to the One born King of the Jews. Again, when our Lord arrives, nature begins to do what it was always meant to do—point to its Creator. Everything that God has made, from atoms to stars, is meant to turn us in wonder and love to the One who formed them, who formed us. So we celebrate the magi seeing the star and recognizing it. We rejoice that heaven and nature sang the praises of their Creator there.

So the song continues today, on the first Sunday after the celebration of the magi’s visit, the first Sunday after the Epiphany, the Sunday dedicated to the Baptism of our Lord. St. Matthew tells us that when Jesus was baptized, “the heavens were opened and he saw the Spirit of God descending like a dove and coming to rest on him; and behold, a voice from heaven said, ‘This is my beloved Son, with whom I am well pleased.’”

Did you catch that little detail at the beginning? “The heavens were opened.” Right there, in real time and space, at the slow moving, mud-churned waters of the Jordan River in the wilderness, heaven was opened. Heaven and nature united again. But this time it wasn’t a choir of angels, nor was it a sapphire star in the sky. It was the Triune God Himself bridging the gap between heaven and earth. God the Holy Spirit entering this fallen world in the form of a dove. God the Son standing on the banks of the river. God the Father’s voice ringing out into creation, “This is my Son.”

And that’s what typically catches our eye on this festival day. Heaven is singing about the wonders of God’s love that are about to the fulfilled by and through Jesus. But tune your ears to hear a lower pitch too. Nature is also singing on this day. For it’s on this day, the Baptism of our Lord, that nature is once again directed to its most noble goal: to do the good and gracious will of its Creator. And this is accomplished today with the creation of Baptism.

Anyone knows that water is essential for washing most things. Even when something else like soap is included, water is still needed. But anyone also knows that natural, plain water cannot wash away things like sin and death. That is beyond its power in nature.

But when the Word made flesh comes to it, things are different. Jesus brings all of heaven down with Him, opening heaven, pouring out its intangible treasures into the water, the water clasping all of it like a jewel. Jesus brings it all: the Holy Spirit creating faith, God the Father’s well-pleased joy. Jesus brings the entire Trinity and everything He offers into the water. And in Baptism, once again, heaven and nature sing.

What is it that they sing together? This is the Son of God, come down to our earth to redeem us. He’s come to fulfill all righteousness, to do everything perfectly in our place. He’s come to fulfill the Law, everything that He has said is good, but we would not do. He’s come to be our righteousness, our holiness, so that we don’t have to achieve it on our own. He’s come to be our salvation, our forgiveness, our protection, our life. Without all that, without the Word made flesh, Jesus, in the water, it is just plain water. But with the Word, with Jesus, with the Triune God, it is Baptism, that is, a life-giving water, rich in grace, and a washing of the new birth in the Holy Spirit.

The Word, heaven, and nature; all given to you. Jesus didn’t come to this world just to do some cool things to show His power. And He didn’t come just to fulfill prophecies, as if He were a slave bound to them. He did all of it for you.

And that’s where Baptism comes in. Your baptism flows out of Jesus’ baptism. In your baptism, which is still doing its work today, the Holy Spirit is given to you. God the Father talks about you when He says He’s well pleased. Forgiveness, life, joy, salvation—it’s all there in the water. He shows you His hand in all creation, how all of it points you back to Him, as simple as water or as wondrous as stars. It’s all His. And now, because of Baptism, what’s His is yours. Let heaven and nature sing of how He has fulfilled all righteousness, for you. In the name of Jesus, the Son of God. Amen.

Previous Story
Not Above the Law
Next Story
What Do You Want?

What Do You Want? 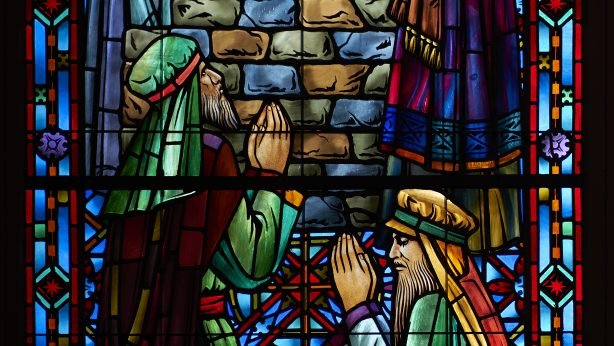 Not Above the Law

SearchPostsLoginCart
What Do You Want?
Let Heaven and Nature Sing
Not Above the Law
Getting What You Need for Christmas
What Joseph Knew
Disappointment and Waiting