A Most Unusual King

A Most Unusual King

We have a word today, on this Last Sunday of the Church year, that has expectations connected to it. That word is “king”. This Sunday is also called Christ the King Sunday. And when we hear that term, that title, we’ll have certain expectations of what a king is, how he behaves, what he does. Some of those expectations will be shaped by the stories we have in common. We may call to mind the heroics of King David from Scripture, or his son, King Solomon in all his wisdom and splendor. If we’re familiar with the legend, we may remember King Arthur and his adventures with the knights of the round table. For the history buffs among us, the Caesars of Rome may spring to mind, or the kings of England in our nation’s history. But even though we’ll have these individual impressions of specific kings, based on what stories we’ve absorbed individually, there will also be some common expectations. Kings are to be images of power and glory, pomp and majesty. Whether it’s a royal wedding or a queen’s funeral, the throne room of a monarch or shining armor on a battlefield, we’ll have certain expectations of what a king should be.

So when we think of Christ the King, we have expectations. In our mind, He’ll do what worldly kings do. He’ll slay the wicked. He’ll put down His enemies. He’ll reward His faithful. He’ll be glorious, bright, shining, attracting everyone with the splendor of His crown and kingdom. He’ll bring health, wealth, and prosperity to His subjects. Under His banner, we’ll go from victory to victory, whether it’s political, social, cultural, financial, or whatever kind of success we want.

But what happens when we don’t see that? What happens when the King doesn’t rule the way we think He should? We start to get nervous. Maybe the King needs a little help from us. Maybe He needs our ideas on how He should be ruling. We don’t see those victories that we thought we should be seeing, so we wonder if we’re doing things right. Or worse, we start to wonder if He’s doing things right. What kind of King is this, anyway? He’s not punishing the people we think He should punish. He certainly isn’t rewarding the people we think He should reward (which more often than not is us and people like us). Where’s the gold and glory? Where are the applauding masses flocking to our doors? Where’s the triumph, the parade, the grand show? And when we look out and see those who are seemingly rewarded—the cutthroats and tricksters, those who don’t keep their word, those who use other people as means to an end—when we see those who seem to be fighting for what’s right lose ground, then we’re tempted to think that maybe the King has changed His mind. Maybe all those things that the Church thought He stood for aren’t His good pleasure anymore. Maybe all that muck out there is what our King actually wants. Maybe His delight is in worldly thoughts and social trends of this crooked generation, political victories and merciless tactics for gain.

The Israelites started to wonder this. When they watched the pagan empires conquer the known world and take them into captivity time and again, they started to ask themselves if God really wanted what He has said He wanted through the prophets. They started to wonder if they shouldn’t serve Him the way that the Baal worshipers served their bloodthirsty god. They started to ask whether God was really King at all. And so they asked aloud, “Is it useless to serve God? What is the profit of our keeping his charge or of walking as in mourning before the Lord of hosts? And now we call the arrogant blessed. Evildoers not only prosper but they put God to the test and they escape.”

God was not happy with their complaint. Nor is He happy with our complaining. The prophet Malachi records the Lord’s reaction: “Your words have been hard against me, says the Lord of hosts.” Even though the Israelites—and we—pretend to be innocent, “But you say, ‘How have we spoken against you?’” we know that in our hearts we’ve griped about the way the King runs His kingdom, even if we never formulate it into words. Anger, frustration, murmuring, sighs of resignation—God hears and knows what all it means. It means we think we know better how He should be King. And He’s not happy with this presumptuousness because it shows that the Israelites in Malachi’s time—like us—don’t get it. We can’t see the truth of what the King is doing.

Our Lord is a different kind of King. He doesn’t want to stamp out His enemies. He does not delight in shifting and ever-evolving opinions of this fallen world and its institutions—political, financial, or social. He does love righteousness, and He has explained what righteousness is in His Ten Commandments and Gospel. But even so, He is slow to crush His foes. He doesn’t want to. Why? Because He would rather see them brought into His kingdom than remain His enemies. We might want Him to rush to conquer them, but He would rather make them His friends than fight them in battle. More than that, He would rather see them brought in as His beloved, protected family. This is how He rules. This is why He doesn’t strike down the wicked immediately; He wants to give them every chance to come to Him. This is why He doesn’t shower the faithful with worldly stuff; He wants them to come to Him in love, not in greed for temporary gain. He rules with mercy, grace, and patience that we cannot even begin to comprehend.

So at the moment when we first see our King wearing a crown, it is a crown of thorns. He has the inscription over His head, telling the world who He is: This is the King of the Jews, but it’s as He hangs on a cross. In our Gospel reading, we see His coronation, because this is how He desires to rule: in forgiveness. He doesn’t threaten His enemies, but He says at this coronation: “Father, forgive them, for they know not what they do.” This is our King in His royal hall, in His throne room—it’s when He’s on the cross, dying for the sins of His subjects.

This is a very different kind of King indeed. He rules differently. As our reading from Colossians said, “In him all the fullness of God was pleased to dwell.” And why does our God dwell in that mortal human body? “To reconcile to himself all things, whether on earth or in heaven, making peace by the blood of his cross.” Rather than destroying His enemies, He reconciles them to Himself. And if they resist, He gives them more and more time to turn in repentance. He gives us all the opportunity to learn to fear, love, and trust this King. “They shall be mine, says the Lord of hosts, in the day when I make up my treasured possession, and I will spare them as a man spares his son who serves him.”

He reigns this way even now. It’s not the high-handed majesty of the world that we would expect of a king. There will come a day when we will see Him in splendor and glory, the likes of which David and Solomon never had, nor could ever dream. But that’s at His return, when we will see with our resurrected eyes the distinction between the righteous and the wicked, between the one who serves God in faith, hope, and love, and the one who does not serve him, but serves himself. But that time, His return, will only be after He has reigned in mercy, compassion, and forgiveness until the full number of His kingdom has been brought from the domain of darkness into His light.

For now, we live under the cross, the throne of Christ the King. For only through the cross will we arrive in the Paradise He has promised—the resurrection of the dead and the life of the world to come. So we live in grace and forgiveness as we pray: Come quickly, Lord Jesus. In the name of Jesus, our King. Amen. 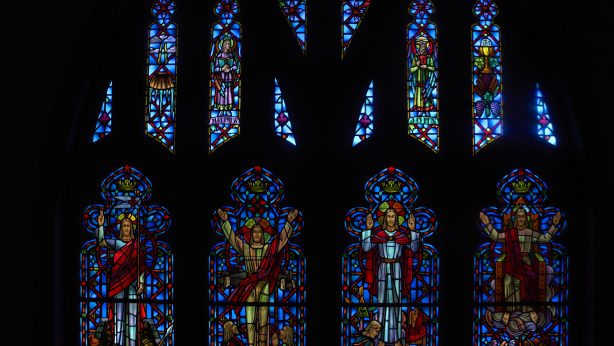